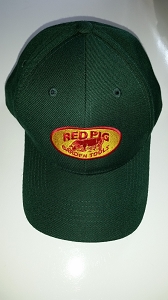 Thanks for visiting us online, where we can help you in whatever state you are in (or country, for that matter).

We are the only blacksmiths in the United States specializing in hand forged garden tools for home gardeners, nurserymen, landscapers, and farmers.

We've been producing hand-forged implements and selling garden tools since 1989. Seth Pauley, current owner of Red Pig Garden Tools, learned blacksmithing, tool-making, and the history and use of garden tools under founder and former owner Bob Denman's guidance and mentorship. Bob is a tool designer, inventor, and frequent writer on various gardening topics.

Want to know more about the company history?

Red Pig Garden Tools started off with Bob and Rita Denman in Orange, California in the late 1980s as a retail nursery specializing in organic fertilizers, hard to find products, and forged garden tools. Over time, Bob saw good forged garden and agricultural tools becoming less and less available, and so he located a local blacksmith and worked with him on the design of the first small line of hand forged tools Red Pig Garden Tools. The blacksmith made the tool forgings to Bob's designs, and Bob finished and handled them.

A few more years passed, and the blacksmith Bob relied on told him, "You better learn to make these tools yourself pretty soon." And he began to teach Bob - who at the time was in his 50s - both the processes behind making the forgings and his wide knowledge of blacksmithing. As Bob's blacksmithing skills developed, he was able to begin expanding the number and variety of tools available from Red Pig Garden Tools.

Bob and Rita eventually closed the California nursery side of the business and relocated to Oregon in 2004, bringing Red Pig Garden Tools and their retail and gardening experience to Boring, Oregon.

After arriving in Boring and settling in, Bob spent much of the first year building a barn out of the lumber from two 100-year old Oregon barns so that he and Rita could run a retail shop on their property. Rita manned the store, shipped orders, and took care of many of the administrative responsibilities of the store. Bob focused on making tools, managing various helpers and apprentices who came through over the years, and sharing his deep knowledge of tools with customers.

You'll see pictures throughout the website of the former Red Pig store in Boring, Oregon as it was when it was still home to Red Pig Garden Tools. In addition to its focus on Red Pig Garden Tools, the store offered maintenance and sharpening of non-power pruning and other edged tools, re-handling, restoration, repair and custom tool making in addition to offering many products - shovel, pruners, rakes, and gloves to name a few - from a wide range of other manufacturers. A collection of garden tools and small space for presentations made the store a place to visit.

One of the main groups of customers that Bob and Rita served through Red Pig Garden Tools were the local garden club members and Master Gardeners nationwide. A couple of times each year, usually in the spring, Red Pig Garden Tools would sell tools and talk to gardeners at outdoor garden fairs and event. We still do this and if you see us at a garden fair, it is a great opportunity to see the variety of tools we make and sell online as well as specialty tools and hard to ship items that we generally don't sell online. It was at one of these events where Seth first entered the Red Pig Garden Tools story.

Seth has spent part of each year since the mid-1980s, when he was in elementary school, living in Portland, Oregon with his father, step-mother and two sisters, all of whom still live in the area. He always planned to make Portland home, at some point, but life kept providing reasons to move around and see new places. In 2015, Seth's wife, Samantha, who is an art conservator and has worked in many museums around the country, was fortunate enough to land a job at the Portland Art Museum which meant that the family could finally come and live in the area around Portland full time. Not long after they arrived, the family spent a day at the Master Gardeners of Clackamas County Spring Garden Fair, which is where Seth first saw Bob and Rita and fell in love with Red Pig Garden Tools (as many others have too...we are at the same fair in Canby, Oregon the week before Mother's Day in May every year, so come find us if you haven't see us in person before).

Initially, Seth asked Bob about the possibility of making some tools designed specifically for women who work with their hands as part of an idea Seth had for a new business. Bob politely declined and said that he was busy enough just with Red Pig Garden Tools and that he was in his late 70s and intended to sell the business soon or wind it down. He offered, though, to teach Seth something about toolmaking, if he first learned something about blacksmithing. So Seth took a blacksmithing course at local blacksmith and knife-making shop in SE Portland, and then to begin spending a couple days each week driving out to Boring to help and learn from Bob.

The arrangement culminated in the fall of 2017 with Seth taking over all the day-to-day of making and selling the tools, while Bob and Rita kept operating the retail store on their property selling among their other merchandise the tools that Seth was making for the online retail business and garden fairs. As part of the arrangement, Bob and Rita would eventually wind down sales of garden tools in their store, and Bob would then use the space once taken up with the hundreds of tools made by Red Pig Garden Tools for other projects he was interested in working on. In July 2019, Red Pig Garden Tools left its former location in Boring, OR to find a new spot to set up a new home more centrally located in the Portland area. Customers in the Portland area or in town visiting are welcome to call and make an appointment to come and purchase tools or pick up online purchases at our temporary home workshop in Lake Oswego, OR until we open a new, permanent location. While it no longer carries Red Pig Garden Tools, the former Red Pig store in Boring continues in business under its new name The Red Hammer Forge and Store.

Over the next couple of years, expect to see an expanding range of Red Pig Garden Tools made available online, including variations of our tools in longer handles, some smaller tools, sets of tools commonly bought together, and special purpose tools that combine the legacy of Bob's creativity with Seth's ingenuity and interests. We'll also expand the educational and informational content on our website to try to share the expertise that visitors to the store or to one of the entertaining and hands-on talks that Bob, and now Seth, give about the history of garden tools, how to choose, care for and use tools, and more.

For information about speaking arrangements, shop visits, or other things...please reach out using our website Contact form or give us a call at 503-479-5571 (We're on Pacific time, so while early morning calls from the East Coast are appreciated, they will probably go unanswered. We'll call you back if you leave a message.)

Seth is craftsperson, writer, and student of history as well as a blacksmith, traveler, and dedicated father to two young daughters and husband to an art conservator. With a life-long devotion to the creative arts - from creative writing to ceramics to wood-working and now blacksmithing - Seth's interest in history and in learning obscure crafts from artisan practitioners has led him to seek out and find mentors. Those mentors have guided his practice of acquiring skills that often can be learned but not directly taught. From working with renowned ceramics artist Mahmoud Baghaeian in Montreal to other less renowned but highly skilled artisans in areas such as woodworking and spot finishing to learning blacksmithing from Bob, Seth has had the privilege of learning artistry through hands-on experience and direct contact with his mentors.

In addition to his creative pursuits, Seth followed an unconventional career path. He has founded or co-founded four other small businesses; taught creative writing and literature at Temple University in Philadelphia; co-founded a literary journal and reading series; written and edited for various arts and culture related publications; served on multiple school boards and committees, and spent many years helping small, family-owned American manufacturers of high quality products create remarkable online experiences for their customers. Now, he takes all those acquired skills and puts them to use running Red Pig Garden Tools.